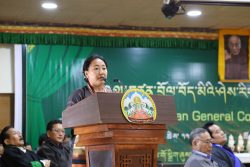 The 7th Tibetan General Conference on Education was organised by the CTA’s Department of Education (DoE) from 23rd to 25th February at the T Building conference hall in Gangkyi, Dharamsala. The four issues that the conference sought to address were: How to develop a strong Basic Education Policy (BEP) implementation plan in the schools? How to address declining school admissions? How to integrate vocational training in the schools? How to strengthen teacher’s professional development? Around 240 educators, schools heads and other representatives from India and Nepal attended the conference. The three-day conference was made possible through funding provided by USAID under the TSRR Program.

Education Kalon and Secretary opened the conference with a presentation of the annual education report, which covered new developments under the DoE, and a report on the schools in India and Nepal.

Sikyong Dr. Lobsang Sangay, the Chief guest, said “it is a critical time for the whole Tibetan community to cultivate national cohesion and work harder on the educational front to improve the education system which would result in multiple rewards.” He citied the example of the Jewish people and the role of education in their success. He stated that education was the key to empowering individuals and strengthening the community.

Venerable Acharya Yeshi Phuntsok, Deputy Speaker of the Tibetan Parliament, emphasised the responsibility of the younger generation in resolving the Tibet issue. He expressed gratitude to the Indian Government for supporting the education of Tibetan children. Geshe Lhakdor la, Director of the Library of Tibetan works and Archives, gave a talk on character building and improving moral values amongst children based on secular ethics. “Teachers should be role models for children and the primary focus should be given on child psychology at every step of school life by relating to ethics, values and morals. Knowledge is the ultimate skills to combat any challenge” he said.

Mr. Ngodup Tsering, former Education Kalon and currently the Representative of the Office of Tibet – Washington, DC spoke on Specialisation and Skill Development in Educational Leadership. He reiterated the importance of the role of school leadership in ensuring a healthy learning environment for the students. He explained the three major characteristics of a good school leader: someone who can build trust among teachers and students; someone who can lead all towards a common goal; and someone who has the capability of building a sound and healthy learning environment. Mr. Tenzin Chemi Norbu from USA spoke on teacher professional development. He covered four topics: teacher evaluation; data Analysis; professional development; and sustainable implementation. Mr. Mensher lodoe of Norbulingka Institute gave a talk on the importance of Tibetan traditional arts and skills and its linkage to Tibetan Buddhism. He said it was important to revive these skills. Mr. Raj Gild of Land-A-Hand India gave a talk on the importance of introducing and promoting vocational education in Tibetan schools.

The third and final day of the Conference featured a talk by Professor Samdhong Rinpoche. Rinpoche highlighted the role and responsibility of teachers and how a teacher should be responsible because they will be influencing the lives of many students. He stated that teachers should selflessly help students in developing their body, mind and soul.

The conference also featured small ground discussions where participants were organised into nine groups with each group asked to discussed and provide feedback on four topics: strengthening the administrative affairs of schools; strengthening the implementation of BEP and social, emotional and ethical learning; professional development of school Leadership and strengthening the role of Parent Teachers Associations (PTAs); and vocational education and arts and craft.

Feedback received included: consolidation of schools so as to focus on quality rather than quantity; encouraging students attending private schools to attend Tibetan schools; workshop on mental health; establishment of more nurseries where young children of working teachers and other staff could be cared for; strengthening teacher skills and subject expertise; more school-based workshops; more awareness on BEP; special attention on students with learning disabilities; more workshop for school leadership; and hiring trainers to serve in the vocational programs 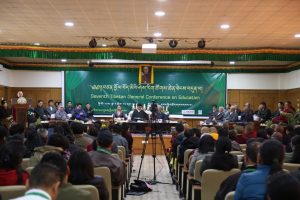 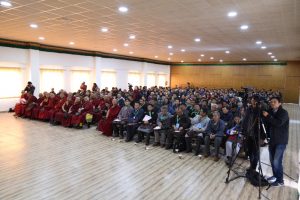